Concussions in athletes continue to be a topic that is making news all over the country.  Talk of the long-term effects of concussions will be prominent in the news, especially after the announcement that Junior Seau did have Chronic Traumatic Encephalopathy (CTE).  The term CTE has been around long enough that many people may vaguely recognize the term, but what is it in basic terms?  This entry will provide you links to some of the many articles written about Junior and help explain the basics of CTE. 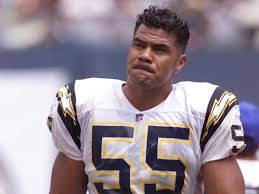 JUNIOR SEAU AND CTE
According to results released by the National Institute of Health (NIH) Junior Seau did suffer from Chronic Traumatic Encephalopathy.  A review of the many pieces published related to this announcement quote his ex-wife and family as noting changes in his behavior, with wild mood swings, depression and insomnia among them.  These are key signs of CTE.  CTE is typically the long-term result of repeated blows to the head (concussions) which is why it has been particularly prevalent in former NFL players.  Recent research has also noted cases of CTE among military veterans.  As the list of individuals who suffered from CTE grows, the impetus to educate young athletes and their parents about the signs and symptoms of concussions, reporting and managing them grows as well.  Concussions are a traumatic brain injury (TBI) and CTE reminds us that there are long-term consequences for decisions we make as young people and parents.

If you would like to read more about what has been written about a Junior and his CTE diagnosis, check out these select links:

UNDERSTANDING CTE
There is a growing body of information available regarding CTE.  Some of it is easy for the general public to digest while other information is meant for researchers and other professionals who understand the nuance of the brain.  One of the more friendly sources in understanding CTE is the Center for the Study of Traumatic Encephalopathy at Boston University.

It defines CTE as:

”Chronic Traumatic Encephalopathy (CTE) is a progressive degenerative disease of the brain found in athletes (and others) with a history of repetitive brain trauma, including symptomatic concussions as well as asymptomatic subconcussive hits to the head. CTE has been known to affect boxers since the 1920s. However, recent reports have been published of neuropathologically confirmed CTE in retired professional football players and other athletes who have a history of repetitive brain trauma. This trauma triggers progressive degeneration of the brain tissue, including the build-up of an abnormal protein called tau.  These changes in the brain can begin months, years, or even decades after the last brain trauma or end of active athletic involvement.  The brain degeneration is associated with memory loss, confusion, impaired judgment, impulse control problems, aggression, depression, and, eventually, progressive dementia”.

This organization is known, in part, for its brain bank where it encourages athletes who could be at risk for CTE to donate their brains to the CSTE for further evaluation following their deaths in an effort to better understand CTE.  Currently CTE diagnosis is confirmed via the presence of tau proteins that can only be found through a biopsy of the brain following the donor's death.  This also means that much work also needs to be done  to be able to diagnose (and hopefully ultimately treat) those with CTE while they are still living with the condition.  This should give us the motivation we need to minimize the potential for brain trauma, concussive or otherwise in our efforts to decrease the potential for the development of CTE.

The list of athletes, now deceased who have confirmed cases of CTE and those that are likely living with symptoms consistent with CTE continue to grow.  The closest source to a comprehensive list of CTE suffers was recently published by the CSTE (and is linked below).  Some NFL players who are deceased include the following:  Mike Webster, Andre Waters, Lou Creekmur, John Grimsley, Terry Long, Tom McHale, Dave Duerson, and Junior Seau.  NFL players are not the only athletes who have been diagnosed with CTE in the last few years.  Others diagnosed include high school football players, hockey players, boxers, and those who serve in the military.  There are others who are suffering from ALS (Lou Gehrig's Disease), Parkinson's, and Alzheimer's who have the potential to be ultimately diagnosed with CTE, since there seems to be growing evidence of a potential connection between these neurodegenerative conditions in those who suffered repeated blows the the head.

As we learn more and more about CTE I suspect the list of names of those who are suffering from or have died because of complications related to CTE will continue to grow.  While NFL players will likely continue to be one of the biggest groups of sufferers, a number of athletes from other sports will continue to be diagnosed as well.  This is in large part connected to our growing understanding of the condition and the ability (ultimately) to recognize it in more and more individuals who have suffered various TBIs or other subconcussive blows to the head.

If you would like to read some of the key research int his area the CSTE has a list of some of the research they have published available.  Many of the articles are authored in part by Dr. Robert Cantu and Dr. Ann McKee, leaders in understanding CTE and the role of sports-related concussion.  For the original research by the CSTE, click HERE.  I recommend the following titles:

In the end, our best defense against CTE is minimizing blows to the head over one's lifetime and preventing the disease in the first place.  This includes reporting, treating and managing concussions appropriately as well as improving equipment to help minimize the risks as much as possible.  Research has shown that those who suffer repeated sub-concussive blows to the head can also be at risk for developing CTE and no equipment is 100% effective at preventing forces to the head reaching the brain, but we should still work to get as close as we can to making CTE 100% preventable.  The warning signs of severe consequences are there, it is time to heed the warning if we have not already.  There are long-term effects to suffering from multiple concussions and repeated sub-concussive blows to the head.  It's time to ask the question, "What am I doing to decrease the injury potential in athletes I know, both in the short-term (concussions) and long-term (CTE)?"

Posted by Athlete Advocate at 3:00 AM