How many athletes can you think of who have been forced to take three years off due to injury or sickness, only to come back stronger and start in their return to their respective sport? I can only think of one – Drew Babb, Senior Defenseman for the University of Denver Lacrosse team. 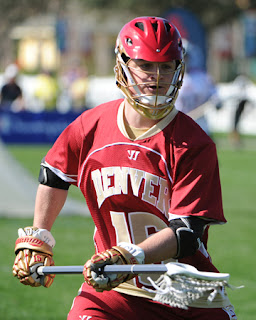 Drew Babb had just finished his high school career at Arapahoe High School where he was a four-year varsity letterman, a two-time All-State selection, an All-American as a mid-fielder, and a team captain who led his team to a state championship title in 2009. He was slated to play Division I lacrosse at the University of Denver, where he would presumably continue the immense success that he had in high school. Babb’s future coach at the University of Denver, Bill Tierney, was expecting nothing less of the talented, high school phenom.

“He was a guy you couldn’t stop gushing about,” Coach Tierney told Lax Magazine in an interview last year. “What a great player this kid was.”

Unfortunately for Drew, the story was not going to go quite like that. Drew had been competing with neck pain in his senior season at Arapahoe after his neck began to swell in February of 2009. He was in and out of the doctor’s office for the next few months after repeated failed attempts to treat the swelling. Drew’s doctor had him take a full biopsy on July 1st after graduating from high school. The day after, Drew was watching TV when his father walked back into the house shortly after he was supposed to have left for work and passed on grave news to him from his doctor – Drew had been diagnosed with Stage I Hodgkin’s Lymphoma. Drew’s father received the results and delivered the news to his son. Drew was more shocked than panicked when he heard the news.

“When my Dad told me the news, he was very positive about it. It was very comforting to know how good it was that we caught it that early,” Drew told me over the phone.

Drew subsequently went through five months of chemotherapy while taking classes at the University of Denver during his freshman year. When asked about the difficulties of managing a college course load and attending practices along with the chemotherapy, Drew downplayed it and attributed his ability to manage the work to the administration and professors at DU. There are no classes at DU on Fridays, so Drew would receive chemo Friday, wait for the nausea to subside, and return to class on Monday.

“I would miss classes on Mondays occasionally, especially later in the treatment when the nausea was worse,” Drew commented.

At the end of this five-month period, the doctors could find no trace of the cancer. However, during the third round of his chemo, another obstacle blocked Drew’s path on his way to recovery. Like most cancer patients who endure chemotherapy, Drew lost his hair and was very nauseous. Although, in addition to the other symptoms, Drew had exceptionally bad body aches in his hips. He would later find out that the reason for this was Avascular Necrosis, which is a condition that was deteriorating Drew’s right hipbone because of a lack of blood supply. This meant a year’s worth of inactivity according to Drew’s doctors – thus ending his hopes of playing his freshman year at the University of Denver.

Even after being diagnosed with Hodgkin’s, Drew was expecting to be able to play in the spring of his freshman year. When he found out he had AVN in his right hip, he thought he would at least be ready to play by his sophomore year. When he was rehabbing in the summer of 2010, a week before the fall practices began, the doctors informed Drew that his right hipbone was growing back on schedule; however, the AVN was infecting his left hip as well, and it was not healing like his right hip did. Thus, the doctors drilled holes in Drew’s hips to increase blood flow to expedite bone regeneration. Unluckily for Drew, this meant that his collegiate career was being cut in half because he would not be able to play his sophomore season either.

Although Drew had not been cleared to play for two years, he was still around his teammates and assisting the team in whatever way he could. To stay in shape in the fall of 2010, Drew swam. As time went on, he began to use the stationary bike and the elliptical, but until he had his final bone scan, he would not be able to run unless it was evident that the AVN had disappeared and his hipbones were growing back.

When asked about the frustration of being on the sidelines, Drew said, “It was definitely frustrating, especially sophomore year it got tougher. I was expecting all freshman year to be able to play that season, and it didn’t happen.”

In February of his sophomore year, Drew received news from the doctors that he would be able to play again.

“The week leading up to those scans was the most uncomfortable week I felt throughout the whole experience of not being able to play, and that includes being diagnosed with cancer and going through chemotherapy. Because, essentially, [the scan] was going to determine whether or not I would ever be able to run again.”

That week, Drew met with Coach Tierney in what turned out to be one of the most calming and helpful conversations that Drew would have throughout his treatments. Coach Tierney asked Drew how he was doing, and Drew said he was nervous. Coach Tierney told Drew he may not understand why all of this stuff was happening to him now, but he will someday.

“That really helped me get back to that comfort level. Whether I can play or not was not up to me,” stated Drew after talking about the assurance of Coach Tierney’s words.

Drew always tried to stay positive about the whole process.  He is very open about his faith as a Christian, and it was that faith and the Christian household he grew up in that really helped him get through all of the hardships and stay positive. He stated that it was God’s plan, and that he will do what he can, but ultimately will trust in what God has in store for him.

Even after Drew was informed he would play again, that did not mean he was free of the challenges that being on a nationally ranked, division I lacrosse program would bring. Drew was an All-American mid-fielder in high school, but Coach Tierney was in need of defensemen when Drew’s junior year rolled around. To add even more obstacles to returning to his former self on the field, Drew was moved to close defense in the off-season after showing his propensity for the position in a scrimmage against the Denver Outlaws, the local professional lacrosse team.

When it came to switching positions, Drew just seemed happy to be back on the field and playing again. However, when he exceeded even his own expectations and saw a potential starting spot opening up for him, he began to appreciate the ability to play while also wanting to compete.

When Drew took the field for the first time since his injury, he described the day as follows:

“It was surreal. During warm-ups, I was just looking around and realizing what I was about to do after what I had been through the past years. It was just so exciting to be playing instead of watching,” Drew said.

Evidently, it did not take Drew long to acclimate himself to playing a new position after taking two years off, because Drew started Denver’s season opener against the Ohio State Buckeyes and never looked back, starting all 16 games that season. He played through intense pain all year, and the amount he was allowed to play was at his own discretion.

In addition to the pain he felt because of the AVN, late in the regular season Drew tore his labrum and played through the pain believing it was the AVN. He went to the doctor for another scan, and was informed he would have to undergo another surgery to repair the labrum and spend six months recovering.

After yet another setback, Drew fought through it and did not allow self-pity to sink in.

“Every time I started feeling sorry for myself, I would start thinking about Tommy [Mallon] and his neck injury. I have seen friends go through things like this,” said Drew. “I did my chemo at the local children’s hospital and saw children taking chemo at ages 4 and 5. I would think about those kids going through worse diseases than me, and say if they could do it then so can I.”

Drew continues to play through the pain. When the weather changes it is especially bad, and on rare occasions he has to pull himself out of the game. At the beginning of this year, the labrum was brutal. However, as time has gone on he has gotten stronger and stronger.

“I feel stronger this year in the playoffs than I did in last year’s playoffs,” said Drew when asked about how he currently feels.

Drew and his teammates at the University of Denver play in the Lacrosse Nationals Semi-Final game against top-ranked Syracuse, and Drew likes their odds.

“We feel good about [tomorrow]. Once you get this far it is really anybody’s game,” said Drew about DU’s chances against the #1 team in Syracuse.

Drew succeeded in battling against cancer, bone deterioration, and a torn labrum just to play in tomorrow’s game, so upsetting the nation's top-ranked lacrosse team would just be like any other day for a guy like Drew.
Posted by Athlete Advocate at 10:02 PM